Anyone who knows me knows that I love being outdoors. From hiking to camping, snowshoeing to four-wheeling, snowmobiling to boating to climbing to just exploring the hills or forests or mountains or rivers or lakes around me, God truly gave us a great world to live in.

Recently I had the opportunity to travel to Toccoa, Georgia to help honor my grandfather's World War II airborne unit, the 511th Parachute Infantry Regiment (www.511pir.com). Toccoa puts on a wonderful World War II Weekend every October and this year's (2021) event was simply amazing. From the USO dance at the local VFW to the community breakfast, the parade down Main Street complete with a mock street battle to a lovely banquet, plus a Sunday sunrise memorial service, a book signing event and beyond. Toccoa is a historic piece of American airborne history that does a great job of preserving and promoting that history.

While there, we took the opportunity to climb the famous "hill" known as "Currahee". If you are a fan of HBO's "Band of Brothers" miniseries, Currahee is the mountain that Easy Company runs "three miles up, three miles down." Easy Company's 506th Parachute Infantry Regiment was only one of four parachute regiments that formed at Camp Toccoa during World War II. Others included the 501st, 511th and 517th PIRs. My grandfather, 1st Lieutenant Andrew Carrico was a member of the 511th PIR and saw combat in the Pacific Theater. Many of his buddies that I've interviewed to write my acclaimed book WHEN ANGELS FALL: FROM TOCCOA TO TOKYO, THE 511TH PARACHUTE INFANTRY REGIMENT IN WORLD WAR II spoke of Currahee Mountain with groans and smiles. One even called it "that darn hill!"

I can see why! It is quite the climb and the grade runs pretty steep in some parts. But how wonderful and humbling it was to make the same trip that so many brave, young American soldiers made before they headed to Jump School at Fort Benning. Plus, the surrounding forest was incredible and the view from the top of Currahee is breathtaking! There is a grand majesty to be found on mountain and hilltops like Toccoa or Olympus or Timpanogos or any of the other dozens upon dozens of mountains I've climbed.

In the late 1700s, my ancestors settled near Roanoke, Virginia, smack dab in the middle of the beautiful Blue Ridge Mountains. Mountains are in my roots, which is why I feel so blessed to living in the middle of "the everlasting hills" of the Wasatch Range in Salt Lake City. But climbing Toccoa made me think of all the prophets in the scriptures that sought solitude in such hills and mountains in order to commune with God.

Mountains are often places where God speaks to his followers and they come back changed for the better. I've been reading through the Old Testament lately and admittedly, while I have read the New Testament and the Book of Mormon countless times, the Old Testament has been a tome of scriptures that I've rather skipped around in. I've studied the well-known stories like Daniel in the Lion's Den or David and Goliath or Elijah and the prophets of Baal, but I think the last time I read the Old Testament cover-to-cover was in junior high school for Seminary. According to some kids I know, that was when the dinosaurs roamed the earth (i.e. over twenty years ago).

But in my recent readings I have found so many gems and eternal truth that are incredibly strengthening. It has been a true joy to discover these wonderful stories and doctrines and words of deep eternal import that I've missed, including deeply moving accounts of the prayers of the followers of God through the ages. Not all were on mountaintops, but each experience left the pray-ee changed forever.

Moses was called to lead the Children of Israel out of Egypt while he was on Mount Horeb when God spoke to him through a burning bush (Exodus 3). And what marvelous experiences Moses had when he climbed Mount Sinai to speak with God face to face (Exodus 19-23) to learn God's will for his covenant people. How sad it is that most Christians focus so much on the Ten Commandments received on Sinai, but don't spend more time learning the other truths God taught Moses on that mountaintop. And all of this occurred because Moses was willing to answer God's call and to climb Mount Sinai to commune with him.

Another mountaintop experience occurred when Elijah sought the Lord due to Israel's sins and wickedness in 1 Kings 19. The people had killed God's other prophets and the scriptures note that Elijah was "very jealous for the Lord God of hosts" (vs. 10). Jealous can be translated as "zealous", meaning Elijah desired to hear from God, to be close to him, to seek and obtain his help. As such, he was told to "Go forth, and stand upon the mount before the Lord" (vs. 11). What followed afterwards is a beautiful example of God's willingness to hear the prayers and cries of his people (vs. 15-18). Elijah was probably weary in body, mind and spirit. He had tried to correct the people's evil ways and had been forced to flew for his life. He wanted the people to repent, and in his hour of need he found God on the mountaintop.

And what about Nephi who lived during Old Testament times (around 600 B.C.) whose father likely knew the prophet Jeremiah? Upon reaching the land Bountiful on the seashore, Nephi says that "I... did go into the mount oft, and I did pray oft unto the Lord; wherefore the Lord showed unto me great things" (1 Nephi 18:3). What a testament to understanding God's mercy and kindness and willingness to hear our prayers! I believe that Nephi was inviting us to have similar experiences with God through prayer when he testified that "he hath heard my cry by day, and he hath given me knowledge by visions in the night-time." (2 Nephi 4:23).

God himself has said, "Then shall ye call upon me, and ye shall go and pray unto me, and I will hearken unto you." (Jeremiah 29:12). Indeed, the invitation to "seek" God is perhaps the most oft-repeated invitation in scripture. The examples of the prophets finding God in the mountains is testament to the fact that God wants to be found. In your own personal scripture studies, I challenge you to look for examples of those who sought God and found him in multitudinous ways. You will be amazed and strengthened by the sheer number of times that followers of God have sought and then found him.

I believe that each of us can have the same life-changing experiences, whether it by on a mountaintop, in our quiet bedroom, in the temple "the mountain of the Lord's house", sitting in church, in the office, in a hospital room, or wherever we may be. We may seek him because of a desire to be close to him, or because we are worried about some trouble in our lives or because we want his forgiveness or guidance.

When I was on top of Toccoa's Currahee Mountain, I said a silent prayer of thanks to God for letting me climb the same mountain that so many of my grandfather's buddies had. I cannot fully describe it, but I felt that both He and they were grateful for my efforts to honor their legacy and share their story with the world. I can testify before Him as Abraham that, "Thy servant has sought thee earnestly; now I have found thee” (Abraham 2:12).

So, seek Him. Turn to Him in prayer. Kneel down, bow your head, close your eyes and open your heart to Him. You WILL find Him. 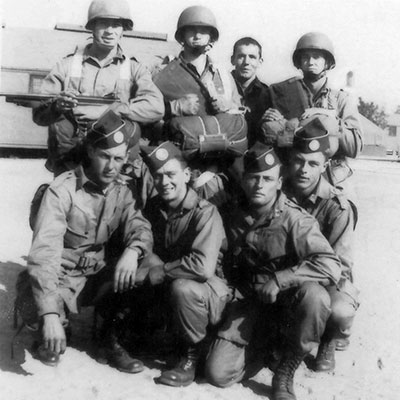 Published in Faith-Based
Tagged under
Be the first to comment!
Read more...

How I Feel Getting Ready for a Midsingle Event

After spending half a lifetime surrounded by some of the best athletes in the world, I've learned quite a bit…

A recent encounter with a bump in the road (aka "adversity") in the pursuit of one of my goals, for…